In the cruel pet trade, betta fish (aka “Siamese fighting fish”) are fighting for their lives. Pet shops, discount superstores, florists, and even websites sell bettas who are forced to live in minuscule cups, small bowls, and even flower vases. Many people who buy these fish on a whim don’t know enough—if anything—about proper betta care, which is more complex and expensive than they realize. On this page, learn why you should never buy bettas (or any other animal) from a pet store. If you already have a betta fish companion, we’ll show you how to give that animal the best possible life.

What’s in a Name?

While you may see bettas referred to as “Siamese fighting fish” or “labyrinth fish,” their scientific name is Betta splendens. No matter what they’re called, these fish are sensitive and complex individuals who suffer greatly when exploited in the pet trade. 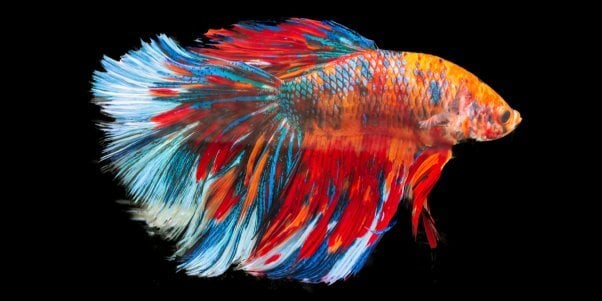 Betta fish are native to Asia, where they live in the shallow water of marshes, ponds, or slow-moving streams. Male bettas are devoted fathers who build bubble nests for their young with their mouths and fiercely protect their babies from predators. Just like us, betta fish are diurnal. That means they’re active during the day and sleep at night, requiring darkness to get a good night’s rest.

While some bettas are captured in the wild, the vast majority of those sold in the U.S. come from breeding farms in Thailand and other countries in Southeast Asia, where it’s common practice to keep them in small bottles. When it’s time to pack them for transport to the U.S., fish are haphazardly dumped into baskets covered with nets and scooped up into small plastic cups. 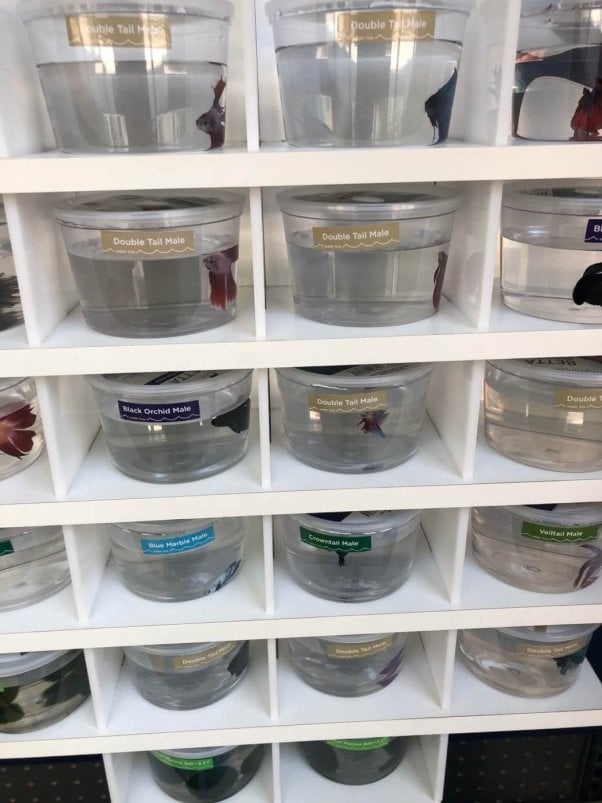 These sensitive fish suffer greatly in the pet trade, where they’re subjected to inadequate care from the time they’re born on breeding farms to when they’re transported to pet stores and sold.

What Do Bettas Eat?

Plant roots aren’t adequate food for betta fish. Bettas are carnivorous animals who, in nature, eat mostly insects and insect larvae. A diet consisting solely of plant roots may keep them alive for a while, but since it lacks the proper nutrients for this species, the fish eventually become sick and die.

Don’t overfeed fish. Too much uneaten food and waste material in aquarium tanks can overload them, causing ammonia and nitrite levels to become toxic. If you already have a betta or other companion fish, remember that you should provide only as much food as they can eat in about three minutes.

Do Betta Fish Get Lonely?

Betta fish can experience frustration and depression. While most of them can be happy in a tank alone, their environment still needs plenty of enrichment, such as caves, plants, and room to explore. They also experience stress—especially when their fins are picked at by other noncompatible fish placed in the same tank. 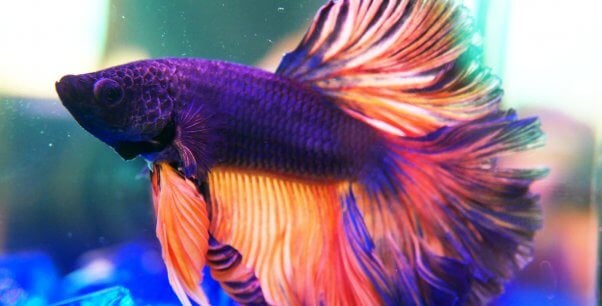 Can Betta Fish Live With Other Fish?

With ample space and hiding areas, female bettas may be able to live in a peaceful group. While males will fight with other males and male gouramis (a similar-looking species), they may be able to live singly in a “community” aquarium containing certain other docile species of fish, such as Cory catfish, kuhli loaches, or guppies. They can also cohabitate with nonfish species, including snails, ghost shrimp, and frogs.

If aggression becomes an issue in any community tank, you should keep and maintain a separate, working quarantine aquarium in which individuals can be placed to avoid conflict with other fish.

According to PetMD, betta fish can recognize their human guardians. They usually swim about excitedly when they see their guardian approaching. They are very curious and will inspect new items put into their tank, which can help keep them mentally stimulated.

Do Fish Get Frustrated Inside a Tank?

Pet shops, discount superstores, florists, and even online catalogs sell “decorative” bettas in small cups or flower vases. The fish often live in just a few ounces of water, which is hardly enough to turn around in, much less swim in. Any habitat for captive bettas must have enrichments such as caves, rocks, and live plants. 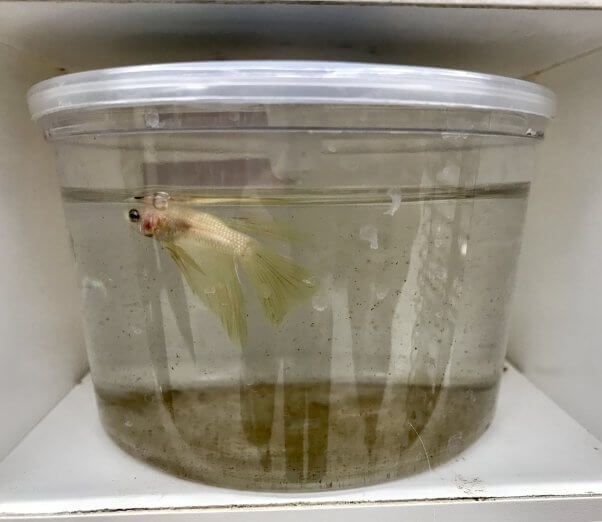 How to Set Up a Betta Fish Tank

Setting up and maintaining a proper aquarium for any fish species is much more complex, expensive, and time-intensive than most people realize, which is one reason why PETA suggests never buying fish as “pets.” If you already have bettas, you can make their lives easier by providing them with an environment that’s as much like their natural habitat as possible. While captive fish can never enjoy natural lives, the following tips will help ensure that they’re as happy as possible. 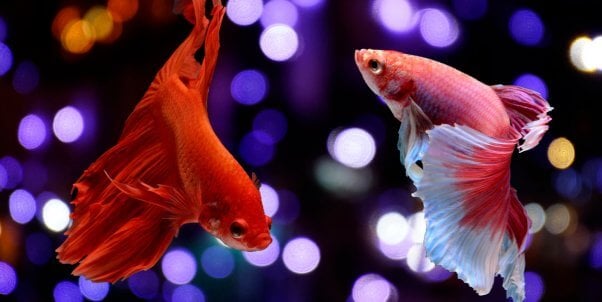 Generally, no fish should be kept in a tank smaller than 10 gallons. However, a single betta can live in a 5-gallon tank—but more is always better. Most municipal tap water contains chlorine and chloramine, which will kill fish, so you must treat tap water properly with a water conditioner before adding it to an aquarium. Once a tank is fully set up with a properly working filter (bettas prefer low-flow settings), substrate, and decorations, the water must be cycled for several weeks before fish are added. Testing kits can help determine when the tank is done cycling. This will allow time for beneficial bacteria to grow, which are essential for breaking down toxic ammonia once fish are added to the tank. These bacteria convert fish waste into nitrates, which can be removed only with regular water changes. About 10% of the water in a tank should be removed and replaced once every week, and a gravel vacuum should be used to remove waste material from the substrate. Soaps and harsh chemicals should never be used to clean a tank, as these substances are deadly to fish.

More Tips on Caring for Fish

The water temperature should be maintained between 76 and 82 degrees. For this reason, bettas should never be kept in a tank with goldfish, who require colder water to be comfortable. The aquarium should be in a spot where temperature and light are constant and controllable. Note that live plants placed at the top of small containers may restrict access that bettas need to obtain oxygen, since they take their oxygen from the surface of the water.

This is only a very brief list of guidelines. Please do proper research long before you make the decision to take on the responsibility of caring for any fish. 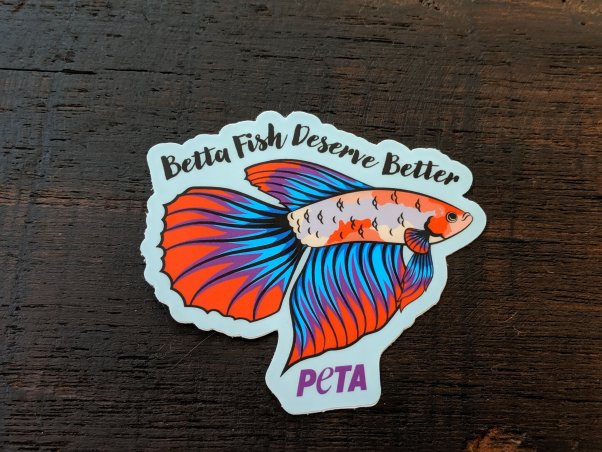 Ultimately, the price most bettas pay in the pet trade is their very life. Living beings with unique needs and wants should never be sold like property. Remember: Purchasing a betta fish from a pet store or breeder isn’t “rescuing” an animal—it’s funding the continued abuse and exploitation of that species. If you already have a properly maintained aquarium, check with friends, neighbors, and even adoption organizations to find a fish to adopt—but don’t support the fish trade by going to a dealer or pet store.

Petco continues to sell these animals in small, inadequate containers. No fish should be forced to live and die inside a minuscule bowl.

Kitten Rescued as Orphan, Finds Family to Love and Other Kittens to Cuddle